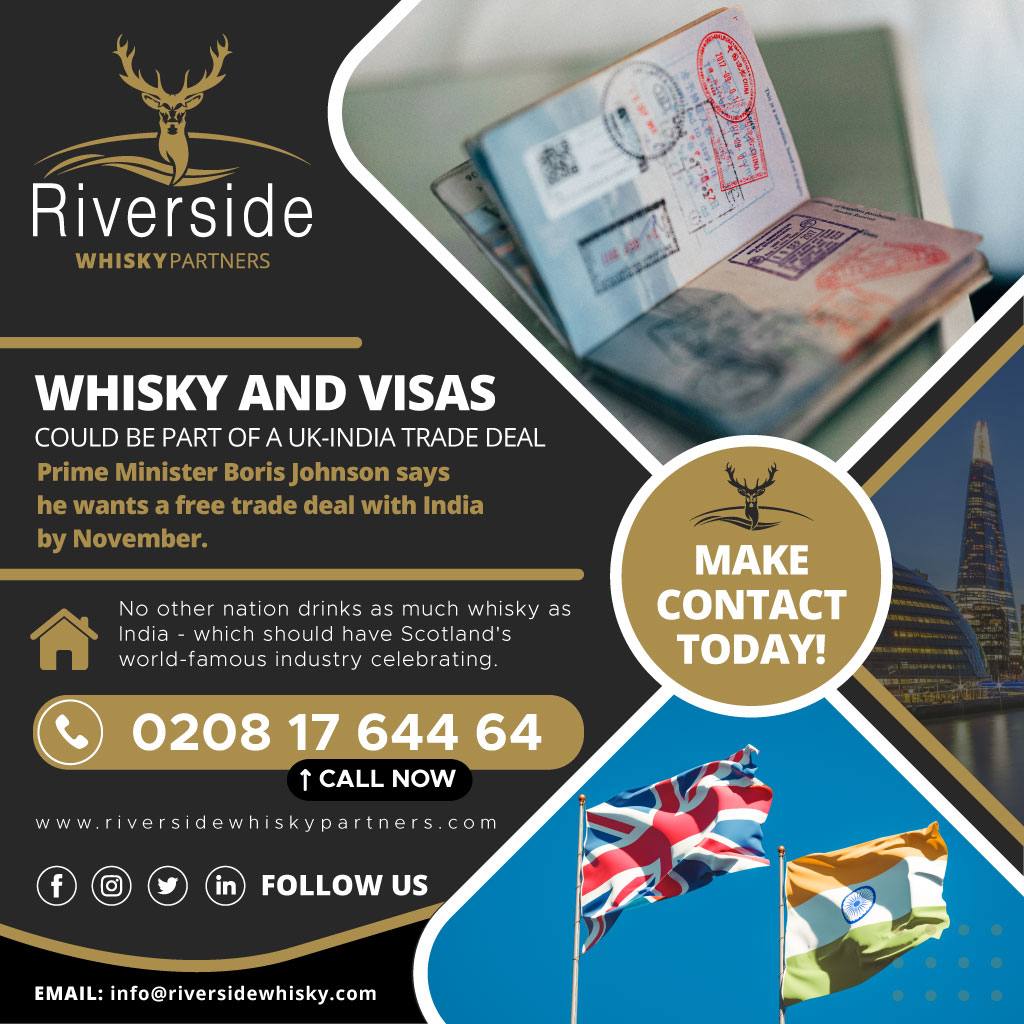 Riverside Whisky Partners has featured articles about India, including the possible potential it holds for the future of whisky imports from the UK. We discovered a recent article by the BBC that looks at the options available to both sides of a possible trade deal between the UK and India, which could open incredible opportunities for the whisky industry.

Prime Minister Boris Johnson says he wants a free trade deal with India by November. But as he prepares to meet his Indian counterpart Narendra Modi, it’s too soon to toast the prospects of a deal that may well prove hard to agree.

No other nation drinks as much whisky as India – which should have Scotland’s world-famous industry celebrating. But each bottle of Scotch sold in India comes with a hefty price tag attached, thanks to tariffs of 150% on imported liquor. So currently the majority of whisky drunk in India is made within its borders. Scotch whisky accounts for just 2% of the market.

Do away with those tariffs, the Scotch Whisky Association says, and exports could rise by £1bn over five years.

But that could be about to change. At the start of this year, the UK and India began talks with the aim of securing a trade deal by the end of 2022. The third round (with many more likely to come) starts next week.

If India does go ahead and lower those barriers, there’d have to be concessions in return. The UK might face pressure to allow Indian products, such as medicines into its market. And there may be calls to grant more visas to Indian workers.

Boris Johnson has himself been highlighting the role that issuing visas could play in filling UK skills shortages, suggesting he may be paving the way for expanding eligibility – but it is not clear how that will be received by voters. Immigration has proved a touchy issue, particularly since the 2016 Brexit referendum.

But for the UK, the attraction is the future potential. By 2050 India may be the third largest global economy, with a booming middle class with vast disposable income to splash. Getting a larger slice of that could be a substantial post-Brexit win, particularly since a free trade deal with the US has remained elusive.

Perhaps in acknowledgement of the complexities, the Scotch Whisky Association has urged an “early harvest deal” calling for whisky tariffs to be dropped ahead of a full deal. It could be tempting to secure a few positive headlines and some good cheer, while negotiators continue to thrash out the fine print of trickier areas behind the scenes.